We Are Hiring. Top Pay. Great Benefits. Work Where You Are Appreciated.

Pruning for Effect ?
Or
Effective Pruning ?

Pruning is defined as a horticultural practice that alters the shape and growth of a plant. The plant could be an azalea or a 100 foot tall White Oak. Proper pruning of shrubs and trees goes hand in hand with proper nutrition. Proper pruning early on in a plant’s life can possibly prevent structural problems in later years. In this sense, pruning can be considered Preventive Maintenance.

There are many reasons for pruning trees and shrubs. Among these are :

1) Pruning for Safety Removal of dead or damaged limbs from trees reduces the risk of death or injury to humans and pets as well as the risk of damage to homes and vehicles. 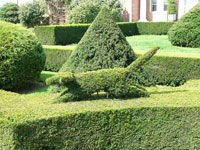 2) Pruning for Appearance In addition to specialized pruning such as Topiary, Bonsai, and Pollarding, it is recommended that trees have timely removal of suckers, water sprouts, and unwanted branches that would otherwise decrease a tree’s desirable appearance. Pruning is also suggested to manage the size of plants and to keep evergreens well shaped.

3) Pruning to Promote Healthy Plants Shrubs and trees can be affected by external forces such as storms, animal rubbing, previous improper pruning, disease, or insects. Removal of damaged portions of trees and shrubs due to these factors, or of branches that cross and rub will help reduce further damage to the plant. According to Dr. P.P. Pirone, pruning can be useful as a control measure for tree diseases: Fire Blight, Black Knot, some Twig Blights and Cankers. It can also be useful in managing Dutch Elm Disease and Crown Gall.

4 ) Pruning for Maintenance In this instance, pruning can be effective to promote flower and fruit development, as well as preservation of hedges. The previously mentioned Tree Forms of Pollarding, Bonsai and Topiary are included here as well.

There are various times of the year when it is appropriate to prune certain plants and trees. I always tell my clients that there is not an inappropriate time of year to remove any deadwood from trees and shrubs. The same would apply for the removal of diseased limbs and potential safety hazards. However, there are suggested times of year for certain pruning to minimize damage to your trees and shrubs. For deciduous trees and shrubs, it is recommended to do pruning before bud break or new growth is initiated in late winter or early spring. For spring blooming plants, such as azaleas or rhododendrons, you must prune immediately after blooming in late spring or early summer. This is done to prevent removal the of the following year’s flowers. Other flowering shrubs, that are planted more for their foliage than flowering, such as barberry or burning bush, should be pruned in early spring. There is a running controversy regarding pruning of Crape Myrtle as to the best time to prune. According to the Virginia Cooperative Extension Service, late winter/early spring is correct. Late summer or early fall may cause new growth that could be damaged by early frost. And don’t commit Crape Murder ! This is the unnecessary Topping of these gorgeous plants. (More on Topping later)

There are specialized pruning recommendations for certain situations. Regarding tree evergreens, these seldom need pruning. Nevertheless, one must be careful as to timing should you wish to trim these trees. With Pines, it’s okay to remove as much as 2/3 of the new growth (candles), but prune before the candles become mature. It is suggested not to remove more than the growth from the previous year. As to Spruce, Douglas Fir and Fir, late winter/early spring is best. These trees will grow laterally if properly pruned at any time of the year. Slower growing evergreens such as hemlock, arborvitae, yew and juniper may be trimmed through the middle of summer. 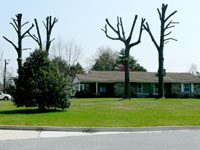 Tree Topping. In a word…… DON’T !!!! Topping is an exorbitant removal of major branches in larger, mature trees. This is done for several reasons. There are a number of folks that call themselves Arborists or Licensed Tree Experts that either are ignorant of the damage associated with topping, or, they are apathetic. Secondly, topping is done to control the tree’s size, to reduce twigs and leaves to lessen yard waste, and to lessen the perception of dangerous and large limbs overhanging your home. The consequences of topping are possible insect infestation, sun scald of the bark, decay of large non-compartmentalized wounds, and possibly the death of the tree. Those trees that do survive this butchering, produce many more limbs that are much weaker in structure than the limbs that had been removed. This growth is usually quite rapid and soon the tree returns to its pre-topped height faster and more dense than a properly pruned tree !

Effective Pruning is needed to provide protective and preventative measures to insure the health of the plants, whether they be trees or shrubs. In certain instances though, Pruning for Effect is used. These methods include Pollarding, Pleaching, Coppicing, Topiary and Espalier.

Pollarding is a pruning theory which gives trees a formal appearance. It’s also used to control the size of large growing trees. Common in European landscapes, Pollarding involves the severe pruning of a tree, often to the main trunk. This process allows trees to become mature while retaining a compact or hedge-like form. Best suited trees for Pollarding are: Linden, Beech and Willow 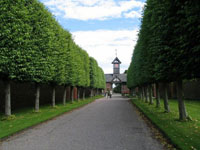 Pleaching is a process which involves weaving tree branches together for ornamental purposes. Common usages are to create lattices or screens to enhance gardens or landscaping. The practice dates back to the Roman Empire. It is used to encourage growth in live trees and to prevent flood damage. In Medieval Europe, Pleaching was used in Orchards. Trees were planted on a grid until their branches touched. Limbs were then encouraged to grow from tree to tree to create bridges on which huts were built ! Branches that are able to bend are best suited for this process. A number of trees are well adapted to this process-Hawthorn, Linden, Pear and Apple. 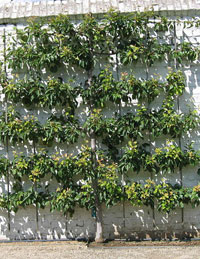 Espalier is a horticultural practice of controlling woody plant growth by pruning and tying tree branches, so they are formed to grow into a flat plane, against a fence, wall or trellis, usually in formal patterns. Vineyards have used the technique for hundreds if not thousands of years. A number of deciduous and ornamental trees can be trained in this matter, including Japanese Maple, Redbud, Crape Myrtle, Southern & Star Magnolia as well as fruit trees: Apple, Peach, Pear, Plum and more. A number of shrubs can be pruned in this manner as well.

oppicing is an ancient practice or pruning shrubs (and sometimes small trees)close to the ground which promotes long term sustainability and robust growth. This horticultural practice predates written history. In ancient times, this technique provided fuel, fencing roof thatching materials as well as wood for furniture and baskets. Coppicing can still be used as a method of controlling shrub size and appearance .There are a number fo benefits to shrubs pruned by this method. Properly Coppiced shrubbery normally will regrow with young attractive rejuvenated appearance. This process also eliminates diseased or dying limbs as well as provides pest elimination.

Topiary is defined as the art of shaping plants, which again dates back to Roman Times. It is the practice of training live perennial plants by pruning to develop and maintain clearly defined shapes. French Parterres are a formal garden type of Topiary. Traditional Topiary involves geometric shapes such as cubes, balls, cones, pyramids, spirals or obelisks. Monkton’s Ladew Topiary Garden has “the most single piece of classical Topiary in North America”-the Hunt-complete with horses, riders, hounds and fox clearing a formally kept hedge. The most widely used plants for topiary are boxwood, holly, yew, privet and arborvitae.