We Are Hiring. Top Pay. Great Benefits. Work Where You Are Appreciated. 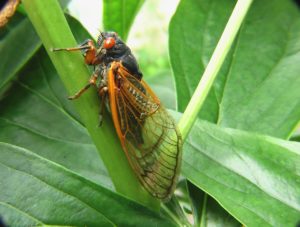 Learn what to expect with Maryland’s periodical cicadas.

You likely remember how the air was buzzing with 17-year periodical cicadas in 2004. Seventeen years have passed in a flash, and now it is time to face the cicadas again. While these insects can be noisy and a bit annoying, they are not dangerous and are gone within a few weeks. But what exactly are these cicadas doing when they emerge, and what should you expect? Read on to learn the essential facts about the soon-to-emerge “Brood X” periodical cicada in Maryland.

The cicadas are recognizable by their noise. Male cicadas drum their abdomens to attract a mate, creating a noise that some people compare to weed eaters. The females are silent but do the work of laying their eggs in trees. Some people may refer to cicadas as “17-year locusts,” but these insects are not true locusts, which are a type of grasshopper. There is an annual cicada that emerges every August, but those populations never reach high numbers.

Adult Magicicada have black bodies, red eyes, and orange wing veins with a black “W” near the tip of the forewings. You can expect most of the brood to emerge in May and early June. A few weeks before the periodical cicadas emerge, the nymphs construct exit tunnels to the soil’s surface. They are visible as ½-inch diameter holes or chimney-like “turrets” formed over holes.

The Life Cycle of Cicadas

A week to 10 days after the males start singing, females begin laying their eggs. A single female can lay up to 400 eggs in 40 to 50 pockets in the wood of several small branches in many types of trees. In 2004, more than 80 species of trees were recorded as being damaged by female cicada ovipositing. The most susceptible were paperbark maple, oaks, maples, ornamental pears, and fruit trees. The cicadas prefer branches that are about .5 inches in diameter. Five to seven weeks later, tiny white nymphs drop to the ground and burrow into the soil, where they eat tree and turf roots and wait to emerge 17 years later.

Are Periodical Cicadas a Threat?

Any damage to trees or shrubs occurs if too many cicadas feed on the plant or lay eggs in the twigs. This can cause “flagging,” or the breaking of peripheral twigs. Mature trees are best at surviving the emergence of cicadas.

In 2004, some homeowners tried to protect small trees with netting, but it was not very successful. The net is often blown off trees or entangled in branches, creating more problems. However, if you do put up netting, do so only during the egg-laying period and use a net with ¼-inch or smaller openings.

Before the emergence of Brood X, you may notice more snakes, spiders, or moles as they flourish on the fully-grown nymphs. Periodical cicadas are additionally not considered pests, so chemical sprays are not advised.

The periodical cicada does not bite or sting defensively. The insects are not poisonous to animals or humans, and they are not known to transmit disease. They only live for a few weeks, and by mid-July, all will have disappeared.

Scientific Plant Service Is Your Go-To Source In Landscape Healthcare

Scientific Plant Service, located in Baltimore, is a privately owned corporation, chartered in Maryland in 1957 by Frank J. Burke. We started as a full-service Arborists specializing in the care of shade trees and ornamental shrubs, but today we are a Lawn Care company that is a huge part of the community. From aquatic environments and snow management to deer and mole control, SPS has services tailored specifically for your lawn and landscape.

We offer services in Maryland, Washington, DC, and Virginia, including: Harford, Baltimore, Carroll, Frederick, Howard, Anne Arundel, Montgomery, Prince Georges, Talbot, Queen Anne’s, Calvert counties in MD, as well as Loudoun County, Fairfax County, Arlington, Alexandria, and Falls Church in VA. For more information, contact us online, or call us at 410-321-0970. Be sure to follow us on Facebook, Twitter, LinkedIn, and Pinterest!

Categories: Pest Awareness | Tags: brood x, cicadas, insects, periodical cicadas, and pest awareness
This entry was posted on Friday, April 30th, 2021 at . Both comments and pings are currently closed.
Click here to chat with a representative